* Nov. 1 - 30, 2019 new solo show WILD REFLECTIONS
At The Kirk-Bear Canyon Library, Tucson AZ
* Nov. 17, 2 - 3 pm Wild Reflections Art Talk
At the Kirk-Bear Canyon Library
I will talk about my techniques and inspiration and show some of my source material for creating this exhibition.
Bring your family and friends to view new Wildlife Art, and if you love books and reading, as I do, grab a great read too!
Follow me for the latest artwork :)
Facebook
SueBetanzos.com
@artgirlsue

Spinach, Strawberry & Goat Cheese Salad with Pomegranate Vinaigrette |
Here is a link to a wonderful, fresh salad. I chose slivered almonds instead of whole ones to toast. It was Soooo good!
Yes, I love to try new recipes and pairings with wine/beer.
Enjoy!
Posted by Sue Betanzos Designs No comments: Links to this post 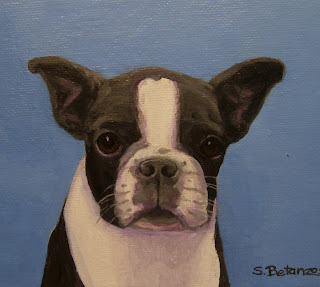 Clyde is such a cutie I could not resist! 5" x 7" acrylic on canvas panel. Unframed.
Want your companion's portrait done? Commissions welcome.
Posted by Sue Betanzos Designs No comments: Links to this post 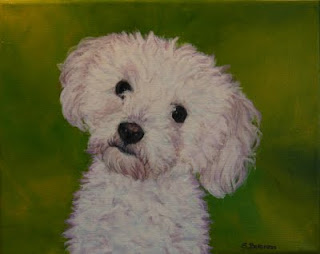 Smoochie is such a sweetie and lives up to his name. Like many poodles he is full of bouncy energy and always happy to see people.
My love of animals and especially dogs has been with me since I can remember. Dogs have always been a part of my life and my current companion australian shepherd Risa is the love of my life. In fact I am focusing on aussies as subjects for many pieces. My commission work, like Smoochie is an extension of my passion for dogs.
This acrylic is 8 x 10" and part of my series of dog portraits.
Posted by Sue Betanzos Designs No comments: Links to this post

Ronan came into Colleen’s life while she was recovering from hip surgery. She had recently lost her older dog, Haley, the previous year, and with this available time at home, she decided to bring a new Golden into the family. In her spare time, she was able to train Ronan how to perfect his tricks and she even acquired new employment at a local dog training facility due to her extensive work with Ronan. “I sent the video of Ronan to the gentleman who will now be my new employer, so in essence, Ronan got me the job!” said Colleen.

Posted by Sue Betanzos Designs No comments: Links to this post

Be inspired by the music in this video and the art of Laurel Skye - amazing mosaic artist. I want to see that house in person!!
Posted by Sue Betanzos Designs 1 comment: Links to this post

10 self promotion tips that aren’t sleazy

With all of the talent out there it takes imagination and a bit of thinking, planning to promote wisely. This post by Passive Panda makes some good points that are worth reading - even if it's stuff we have already read before.
We all want our creative voices to be heard in a way that draws instead of repels!
So read on and let me know what you think!
10 self promotion tips that aren’t sleazy
Posted by Sue Betanzos Designs No comments: Links to this post 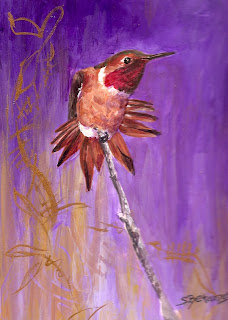 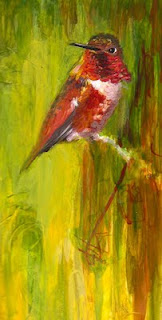 A couple of little gems for an upcoming show on hummingbirds at Tohono Chul Park. They are fine art contemporary wildlife paintings - my favorite!
At 2 3/4" x 6 3/4" for the green and 4" x6" for the violet, they will need custom matts.
With all of the fires raging in Arizona I just know the wildlife as well as people are struggling. My heart goes out to them! Sending vibes of love, hope and courage their way!
Posted by Sue Betanzos Designs No comments: Links to this post 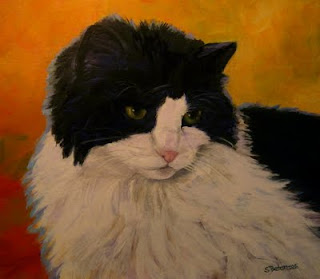 This is in memory of Carabobo, the sweetest kitty. She had dignity, poise and grace - a classy cat.
A sunset background with bits of green to suggest the green of her amazing eyes.
On another note - Arizona is on fire. The smoke from fires in the area have caused so much damage. My heart aches for the people and animals caught in it. Today I just heard Mrs. Green's cabin in Greer AZ was burned to the ground.
I stopped by to introduce myself again to Mrs. Green, the radio celebrity environmentalist. The buzz of activity I encountered when I arrived at Renee's Organic Oven was totally unexpected. Apparently it was a soft grand reopening of the restaurant that specializes in an organic and gluten free menu. Everyone was rushing around and I wondered for the 'inth' time how i lived in an alternate universe - unaware of the goings on. Though my work has hung in the cozy eatery, I tend to happen upon events - an unintended party crasher - again. Where is that inside loop, the 'in crowd' so I can join too?
There was an open house sampling inside the new and improved interior, another sampling outside via Yelp, and a radio show all at the same time. Kudos to Renee for pulling off the hyper busy events.
Mrs. Green graciously included me in her radio show and I got a few minutes to explain what I do and say my name and website. She's a gem and very simpatico, sincere.
Lastly, for all of those out there who have asthma, doesn't the smoke from the fires makes breathing feel like your lungs are two sizes too small?
Posted by Sue Betanzos Designs No comments: Links to this post 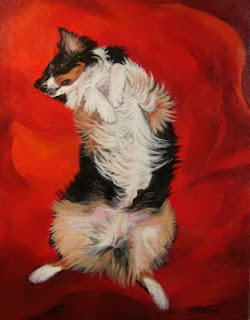 Risa asking for even More belly rubs! She is so easy to spoil. This is a rich red, which I loved working on. Now for the next one, another aussie since I am in an aussie painting mode. I love the breed and am really working to get more exposure in this genre of dog painting/portraits. I love dogs, but aussies are my passion - intelligent, intuitive, quick to learn & respond, a pleasure to train.

Stay tuned for more paintings and a very cool mosaic project. Hint, it has to do with a wonderful wildlife organization ...
Posted by Sue Betanzos Designs No comments: Links to this post 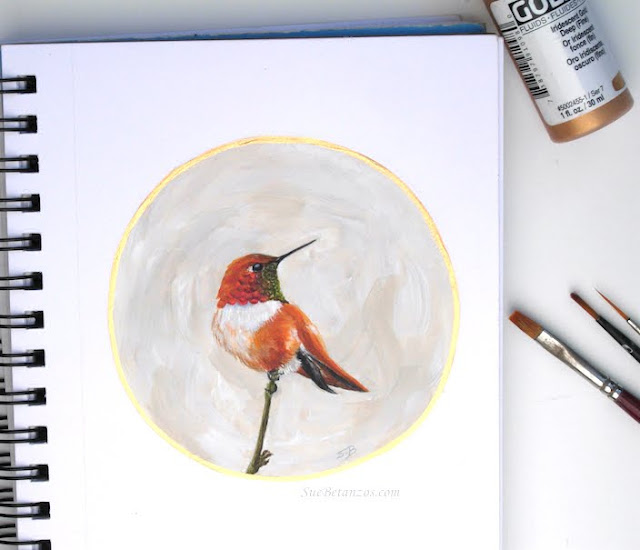